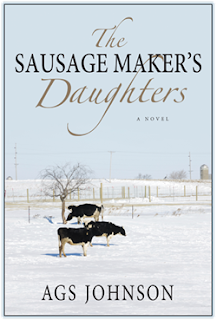 Leaving the sunny shores of California behind, Kip Czermanski steps off the plane into bitter cold and is accosted with all the reasons she vowed she would never come back to small-town Wisconsin, her hometown. But somehow in her sister's pleadings, she had agreed to come home for a family emergency. As her sister trudges towards her holding her old, ratty coat from college, she begins to question whether this was a good idea.
Not even a week later, she is confused and angry as she finds herself contained in the local jailhouse. Spending her recent years as a front row voice for numerous counter-culture movements, she had thought she left her years as a scapegoat behind. Never could she have imagined when she gave her ex-lover up for dead that she would become the prime suspect in his untimely death years later. In her attempt to solidify her innocence, she makes very startling discoveries about her family- discoveries that could make or break her case.
Trapped by a family steeped in dysfunction, surrounded by a town that won't let memories die, Kip finds herself having to put her trust in those who have never given her a chance. Will this time be different for her? Will the revelations she makes about herself be enough to clear her name? Kip is in the fight of her life, and there's only one thing that can free her. The truth.


I decided to read this book in an attempt to broaden my reading horizons, as I wouldn't generally pick one like this off the shelf. I still believe it isn't my favorite genre, but I can say that it was very well written. The author does a great job with character development, and has a writing style that will easily suck you in. When you are not absorbed in the intricacies of the well-thought-out story line, you will be racking your brain trying to solve the case. She paints a very vivid picture of some very real life events which will draw you in with emotion. I know this will be a much read book!
his book was provided free from the publisher for review. I also post all my reviews on bookgateway.com and amazon.
Posted by OceanDreamer at 7:37 AM